I'm not very good at math, but I am fairly certain this is my 9th month of being married, well on the 26th it will be.
And I finally ordered our wedding pictures.
I really don't know why I have waited so long, but I am glad I finally have them!
However, ordering them was a lengthy process.
In preparation for my wedding I made sure to get a top notch photographer. Which I am so thankful I did. But I had over a thousand pictures to go through and figure out which ones I wanted to order.
This is not as easy as it sounds.
But 400 photos later I narrowed it down and placed my order.
Yes, 400. 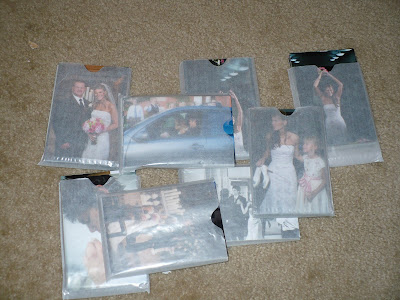 Yes, I know the average person doesn't want to sit and look through 400 pictures, but I would. So I went ahead and ordered them.

Plus I found this great photo album, that I thought matched our guest book perfectly. It only holds 200 pics so I need to find another book to coordinate with these two. 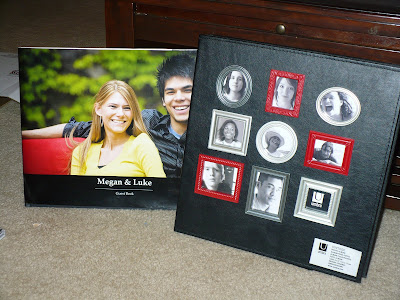 It was so weird looking at our wedding pictures. Up until this point I had only seen them on the computer.
While holding them in my hands, so many emotions of the day came back to me. And some memories that I had forgotten.
I remembered what is was like getting ready, anticipating the day.
I remember having no appetite but my bridesmaids were yelling at me that I need to eat (love you girls)
In one picture you can see my sister coughing in the background, and then I remembered that she woke up sick that day, with a red eye that was almost swollen shut. Surprisingly I was pretty calm about this.
Looking at the pictures of Luke and I together, I remember having a slight panic attack right before the ceremony that he wasn't going to show up. I never shared this secret with anybody until months after the wedding. My friends laughed at me when I told them.
He never had any intention of leaving me alone at the altar, I'm just crazy, and apparently have watched too many movies.
I had no idea that my dress showed so much dang cleavage. I sort of feel a little skanky.
I forgot that one of my bridesmaids necklace broke mere minutes before the ceremony.
And yet somehow in the pictures it is on her neck perfectly in place.
I have no idea how she fixed it back there in that bride room, I need to ask her about that.
And I love that the photographer captured the moment it broke.
I forgot that my shoes were cutting off the circulation to my entire body (can that happen?) and I walked around the majority of the ceremony barefoot.
I am so thankful for so many wonderful pictures to remember this entire day by.
In one picture I am waiting for my dad to come get me to walk me down the aisle, and there is a church bulletin board behind me that says: "Circle of Life". I felt that this was a completely appropriate way to wrap up the day.
I just now realized this post would have been better if I would have shown you the picture that triggered each memory.
Its 11:00 and I am tired. Maybe another time.
By the way I ordered all of my pictures from Mpix and I am VERY pleased with them!