Tonight Luke had a Gig with his band.

And true to nature, I was a nervous wreck all day.
Luke on the other hand was calm as a cucumber. Playing music is just like talking or eating to him, he never gets nervous.

But I get nervous enough for the both of us, so it evens out.
All day long I was so afraid that nobody would come to his show.
About two hours before the show I called him and said "I don't think anybody is coming to your show"
Clearly I missed the "Be a Supportive Wife" memo.
When I got home from work I had about an hour before the show so I decided to go jogging to work off my nervous energy.
It wasn't until I got about halfway through my jog when I realized that it was a mistake.
I don't jog often, so when I do it can be bad. Which was today.
I got one of those horrible 'running pains' in my side and I was tempted to just lay down on the sidewalk and let the birds have their way with me.
But then I remembered that I was in charge of selling merchandise at Luke's show so I had to keep trudging forward. I couldn't leave the merch table empty.
My great jog had now become a slow-paced-walk.
There was a girl about my age jogging in the opposite direction as me. And she passed me twice.
TWICE.
I finally made it home in time to freshen up and leave for Luke's show.
I would talk about how I have this amazing ability to not sweat - but due to the fact that my jog was a slow-paced-walk, I don't think I have anything to brag about.

So I made it to the show and manned my merchandise table.
Which is a whole other story in itself.
Do you know how embarrassing it is to be the person taking money, but you have NO idea how to make change? I worked in a bank for 6 months and all I learned was how to type numbers into a computer.
I needed that computer tonight.

I ended up making a cheat sheet which came in handy. At first I tried to keep it under the table and just sneak a peak at it, but by the end of the night I had to put it on top of the table.
Math is not my friend.
All in all the show was great and my cute husband, along with the band, rocked it out. Fun times!
Manning the table:
I take my job seriously, just don't give me any bill larger than a 10. Thanks. 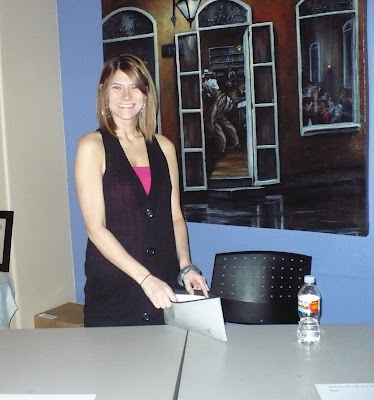 Some of our church friends out for the show. Their support is so important to us! 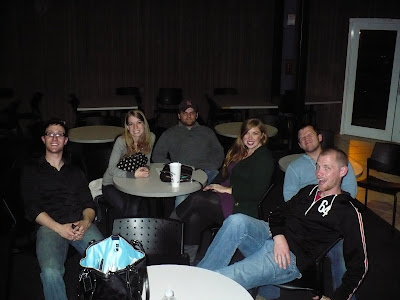 Obviously people came to the show. It was a great turnout and my nerves are back to a normal level.
Well, my normal.