My voice is back! Yay!
I went to the Doc on Friday, got some good meds, and came home and slept for the afternoon. Gotta love those sick hours I have racked up.
On to exciting things: Friday night was Luke's band's show in a Battle of the Bands and they won! Woo Hoo!

But I have to admit I had already left by the time they announced the winner. Nasty bars with scary people, sticky floors and chairs that I wouldn't touch with a ten inch pole aren't my cup of tea.

So after my boy's band played - I took out of there as fast as I could. I then enjoyed the rest of the night with my DVR while Luke breathed in germs that I can't even begin to speak of.
Anyways, Luke's band played really great, sounded really great, and their Indian lead singer was stinking cute. However this is me speaking 3 days after the event.

The night of the event I was a total wreck.
I don't know why, but I get SOOO nervous when Luke plays a show. It is so weird. Luke doesn't get nervous, I don't get nervous when he leads worship every Sunday morning, the band has never completely messed up a show or given me reason to get nervous, I just do. Luke thinks it is so weird that I get nervous.
I'm talking so nervous, my stomach is in knots, I can't eat, think, talk or watch the show. I usually don't even stay in the same room that they are singing in and I have NEVER taken a picture of Luke during one of his shows because I don't want people to think I'm 'that girl'. Clearly I have issues.
So anyways my friend Kelsey was nice enough to take pictures.

Here is Luke rockin' the show - he would be so embarassed by that statement. Good thing he will read this after it is published. 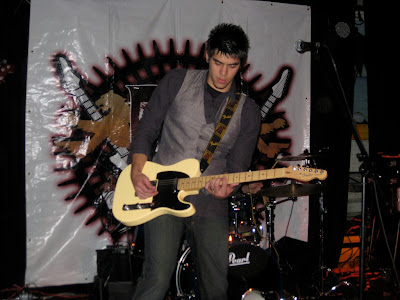 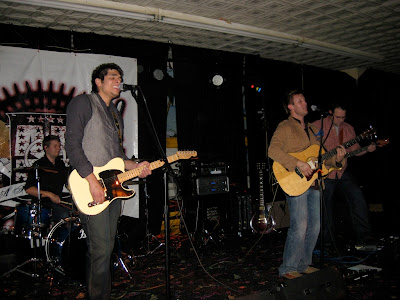 Me and Luke with Kelsey the photog for the night. Thanks Kels! 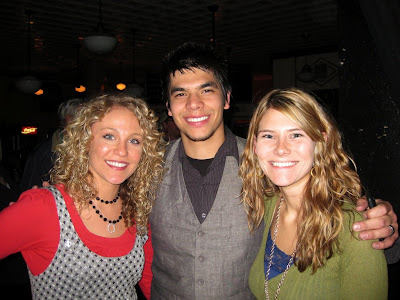 Before the show I went and ate with two of my friends Stephanie and Tambra. We all used to see each other almost every day, now we see each other about every 4 months, so we are excited when we get together! Growing up is hard to do.

This is a picture I tried to take using my self-timer. I get so nervous asking random people to take my picture (I'm really not a shy person) so I try to set my timer as much as possible. Our waiter was about 2 seconds from walking in front of the camera which is why we appear to be screaming.

I'm realizing how many weird phobias I have. 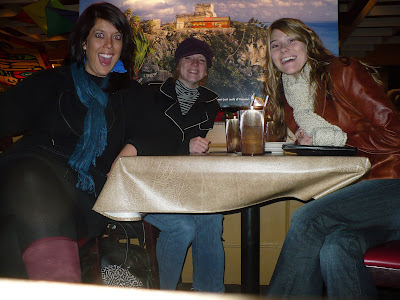 Pay It Forward!
Tonight I came home and the wonderful Liz had sent me a package!!!!! I was so excited!!!!
Don't you just love getting packages in the mail??
She sent me:
Two very cute Chrsitmas towels
1 christmas cookie mix with a cookie cutter
and..
A gift card to chick fila! She knows me well.
Thanks so much Liz I love it! 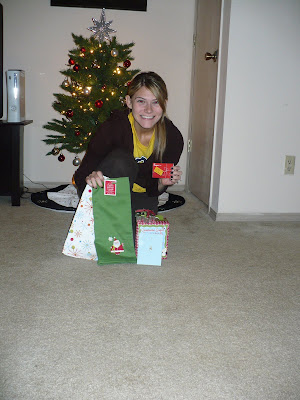 I also took this opportunity to showcase our tiny Christmas tree becaue I know my grandma would like to see it.
I would never write a post about my Christmas decorations because, well friends, you are looking at it. Just one little 4 ft tree. But I plan to go all out next year!
Hope you had a great weekend!