Here lately I have been asking friends and family for their much needed advice: Should I cut my hair? I ask this question multiple times a day. I even went ahead and made the appointment so that I would do it, but now I'm thinking I might just trim it up. I have no idea what to do....so naturally I look to others to tell me what to do.
Which doesnt always work out on my end.
Here an example of when I took some advice, and it didn't work out so well:

One time last winter we had a HORRIBLE ice storm here in good ole OK.
For the record, there are two things I hate: Cold Weather, and Driving on the ice.
They sort of go hand in hand.
Schools and offices had been shut down for the first part of the week, and due to the fact that I refuse to drive on ice Luke had been toting me all around town. Which was great for me.

But then the main roads started to get a bit better so schools and offices opened back up.

Well I woke up one morning got ready for work, and headed outside to find that my car was a COMPLETE block of ice.

I hadn't driven it all week and it sat outside and collected snow and ice, it would take years to defrost.
So I called Luke and said I can't drive my car can you take me to work? And he said,
No.
Well, it was probably said in a nicer way with some sort of legitimate excuse (like working or something weird like that) But I didn't hear that part. I just remember the 'no' part.
So I said, (in a very responsible and mature way) Are you kidding me? I have no way to get to work my car is covered in ice what the heck am I suposed to do?
To which he replied:
Get a hammer and chip the ice away.

Can we please just have a moment of silence in remembrance of the moment my boyfriend told his 'never used a tool in her life' girlfriend to HIT her glass windshield with a hammer?
So... I did what I was told, I went in the garage found a hammer went to my car and began to chip away.

Did I mention the fact that I was a little ticked off that Luke wouldn't take me to work? I may have chipped a little harder than I was advised.

Anyways, the next thing I remember is not having to worry about chipping the ice off of my windshield anymore.

The massive sheet of was now covering my entire back seat. My leather back seat.

I called Luke and said "Well I did what you told me to, I busted my back windshield out"

Needless to say he freaked out and said that was not what he told me to do, and how hard did I hit he said to gently tap.

I'm sorry, but the words 'gently tap' never left his mouth before that moment. It was a recovery tactic, and it didn't fool me.

Later when I told my parents the story I may have omitted a specific part, In face, my dad wanted to know how ice could just bust out my window without me touching it at all, I said: I have no idea, it must have been some strong ice.
Seriously, would you tell your dad that you hit your glass window with a hammer cause your boyfriend told you too?

I didn't think so.

When I went to pick up my car from the window repair people (except there was no repairing here, it was a brand new window) the nice man helping me said: How did this happen? And I said, I don't know the ice just fell through, and he SERIOUSLY replied, "well it looked like a hammer to me"
I left immedately.
Here we are in the great Ice Storm of 2007. We are in front of a tree that used to go up and down, now because of the ice it hangs over like this. This was after the incident. I had a new window and I was over it, and we had a good memory! 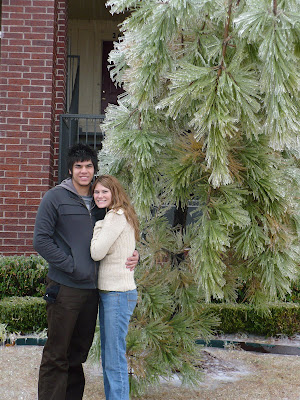