*After reading every body's comments in my last post I have decided I'm having a blogger game night, everybody fly to Oklahoma and we will all play games together! :-) If only we could really make it happen. It would be so fun!*

A couple of months ago my good friend Kara called me and asked me if my mom and I wanted to go to an American Idol concert with her and her mother in September. The first thing I thought was "Whoa, I will be a married woman then" Which was very weird to me, at that time I couldn't even fathom living with a boy.

So due to my love for cutie Ryan Seacrest I decided that I could not pass this concert up.

The night of the concert I learned that Ryan Seacret does not go on the tour with the idols, it is just a bunch of wannabe Pop Stars.

My heart broke a little.

All in all the concert was really good. I got to see some of my favorite idols (Jason Castro, Brook White, David A.) and then some of my not so favorites.

I also got to see something I had never seen with my very own eyes.

The type of Cougar I am referring to is not the animal it is: A woman who enjoys the company of much younger man.

It is the night of the concert. The concert is almost over, I have enjoyed a nice night of sweet songs, horrible outfits, and a little bit of dancing. Next up is David Archuletta, I have been told he looks similar to what Luke and I's future children might look like, so he is undoubtly my favorite Idol (plus I think he is just too cute for words).

They announce his name and the crowd goes CRAZY. Hundreds of young girls screaming for him.
Well I just assumed they were young girls. I never in my life could have imagined what I was about to see.

David A. emerges from the floor of the stage playing his piano in perfect concert style. I'm enjoying his playing and listening to him sing when all of a sudden my mom starts hitting me yelling (over the screams) OMIGOSH LOOK OVER THERE!!!!

I turn my head ever so slightly to the right, and find three grown women (probably in their thirties) decked out in David A. gear (t, shirts, pins, etc) CRYING. Actually crying is an understatement. Remember in the 80's when teenagers would scream, cry and pass out when they went to a Michael Jackson concert?

It was similar to that.

Forget David A. on the stage, these women were MUCH more entertaining. He sang three songs and these women cried, swayed, patted each others backs, hugged, and comforted each other during all three songs. My favorite part was when another woman (probably in her fifties) came up to them and passed down a box of tissue for them.

It was absolutely priceless. I will always remember my night with the Idols and the three crazy Cougars.

Here are some pictures from the concert night. It was pouring rain that night, so please excuse the drowned rat look.

Me and Kara before the concert. And before we ran a mile, or 20 yards to the bus. Pay attention to the hair: 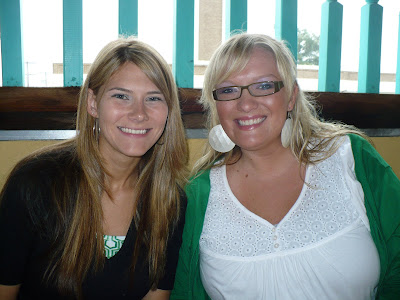 This is my momand I after we ran in the rain. It didn't take long before the hair was in a pony tail. I really wish I wouldn't have taken the time to straighten it. This was taken mere minutes before the Cougar sighting. 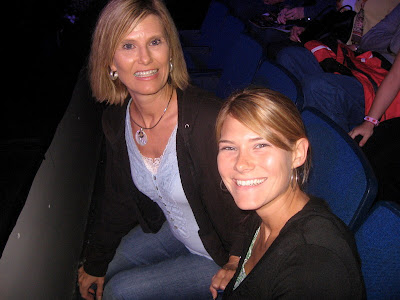 Kara and her mom. Apparently Kara didn't know a pole was block her face. 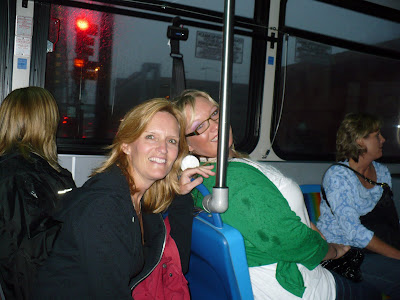