Let me share a great story with you. The story takes place when I was about 13 years old. That year was the fateful year that I decided that I was too old to go trick-or-treating. (do you ever have moments where you wish that you could go back and tell your child/teenage self 'don't try and grow up so fast!!! It will happen eventually just let it happen'). Anyways...I decided I was too old and I was just going to stay home and pass out candy while my sisters went our door to door collecting candy.

So after hours of my sisters being gone and me sitting by the door holding a bucket of candy passing it out to each child that came to the door (probably sneaking a couple of pieces of candy every now and then) my sisters came home. It was at this moment that I realized my horrible mistake of staying home. They had TONS of candy. Me being the sugar/junk food addict that I am became extremely jealous of the amount of candy that they had received.

It was at that moment that I decided I was not too old to go trick-or-treating, and even though it was getting late I needed that candy! So I put on my Sacajawea costume (yes my love for Indians started at a young age) and headed out to go door to door.

NOW this is the best part: about 90% of the people just dumped their remaining candy straight into my bag. It was so late that they figured I would probably be the last costumed child to come to their door and they didn't want to be stuck with all that candy - so they just gave it to me!

SO... I ended up with more candy than my sisters combined (almost)

Moral of the story:
It is ok to wait until the last minute to do thing....sometimes you are even rewarded for it!

The Year it All Went Down: 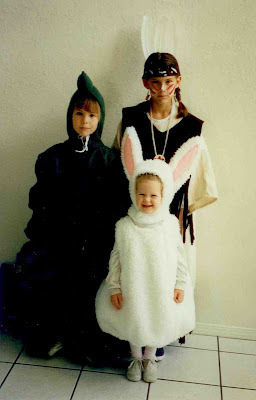