Did you know that your car key heats up when it is in the ignition? Well I had no idea and today I took my key out of the ignition and went to check the mail and put the key in my arm pit. OUCH. It seriously burned me. Weirdest thing ever.

Luke and I have an unspoken competition of turning on the other persons seat heater when they are not looking. We like to see how long it will take before the innocent person begins to get really hot. (yes we are mature). Luke is really good at it and always gets me. I hit about 200 degrees before I notice it is on. Me on the other hand - I'm not so good at it. Lately when I am in the car alone I practice my swift 'cat like moves' to turn his seat heater on without making a sound. I think I am getting pretty good at it.

I have a cute picture to share but it comes with a story. When Kati was a senior in high school she went to the animal shelter and rescued a dog from being put to sleep. She named the dog Daisy. Daisy instantly became attached to Kati as if she knew that she had rescued her. They became best friends. When Kati left the house Daisy would go through seperation anxiety (yeah weird). So needless to say we were worried when Kati became pregnant, we didn't know how Daisy would react having to share her best friend. Luckily Daisy took Maxton under her wing and loves him just as much as she loves Kati. Here is a picture my mom captured. She walked into Kati's room to find Kati and Daisy checking on Maxton! 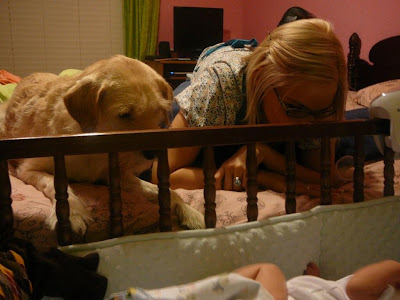 I hope everyone has an awesome weekend!